One of the best parts of my work is that I get to meet food producers who care deeply about what they make. Writing Great British Cheeses in spring 2008, gave me an insight into the world of British cheesemakers, many of whom are wonderfully obsessive about what they do. Farmhouse cheesemaking does seem to exert a particular fascination on those who undertake it. Maybe it’s the elemental satisfaction of taking a liquid – milk – and transforming it into a solid food – cheese. Jemima Cordle, who now works alongside Chris Duckett making Duckett’s Caerphilly, is an example of someone who fell in love with artisan cheesemaking, recently leaving the world of biochemistry to take up making cheese instead. Jemima kindly invited me to visit the dairy and see the cheesemaking process for myself.

Caerphilly is historically a Welsh cheese. By the early twentieth century, however, the Somerset’s farmhouse cheesemakers started making Caerphilly for export to Wales. Whereas Cheddar, Somerset’s traditional cheese, is historically matured for many months, Caerphilly is eaten when only a few weeks old so provided a valuable cash flow for the Somerset farmers. Veteran cheesemaker Chris Duckett comes from a family of Somerset Caerphilly-makers and grew up seeing his grandfather make it. Today, working together with Jemima Cordle and Andy Frecknall at Westcombe Dairy, Chris continues to make this classic cheese.

Jemima herself had a memorable encounter with Caerphilly cheese while a young school girl. “When I was seven years old,” she remembers, “I went on a school trip to a Caerphilly cheesemaker on a farm in Wales. I have vivid memories of the smell of the milk and drinking warm milk, fresh from the cow My sister and I bought my father a huge lump of Caerphilly because he was mad about cheese but by the time we got home we’d eaten it all up because it was so delicious. I have this memory of that cheese – it was very lactic, very fresh.” Inspired by this memory and with a very clear sense of what she want the cheese to taste like, Jemima at Duckett’s is now on a mission to make “true Caerphilly”.

Today only a handful of cheesemakers, Ducketts’ among them, make Caerphilly the traditional way. The milk they use at Duckett’s comes from Westcombe Dairy, noted for its farmhouse Cheddar, and is soured by adding a traditional pint starter. Duckett’s pride themselves on making a hand-made Caerphilly and having watched the process I saw for myself what a lot of physical, literally hands-on work goes into their cheeses. This involvement for Jemima is part of the satisfaction. ‘For most people this would be mechanised,” she explains as they patiently stir the curd to release the whey, “for me that would take the joy out of it. I love the see the changes, to feel the curd.” Once the milk has been curdled Jemima, Chris and Andy work hard and intensely, cutting away at the curd with long knives and forming a channel in the middle for the whey to run off. The broken curds are then piled by hand into cheesecloth-lined moulds, stacked, checked and pressed briefly.

Each cheese is then taken from the press, out of its mould, deftly salted and returned to be pressed overnight, after which they will be bathed in brine. Jemima then takes me to the cool damp cellar where the Caerphilly cheeses sit on shelves, developing a natural mould rind over a pale primrose-coloured paste. Ready to eat at seven weeks, by this time Duckett’s Caerphilly has a soft texture and a delicate, lactic flavour – mild yet satisfying in its simplicity. Jemima gazes proudly at one of her cheeses: “Isn’t that beautiful?” she asks with the satisfaction of a creator. 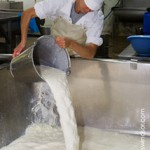 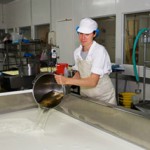 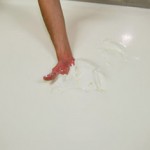 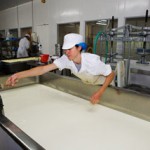 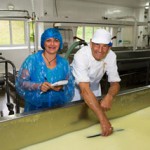 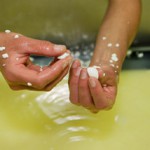 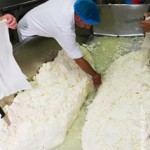 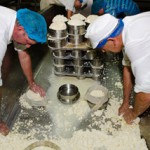 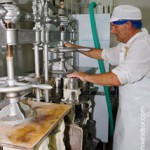 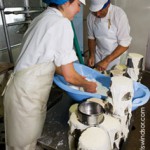 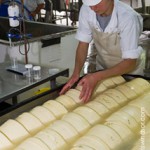 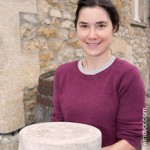 You can find more food stories on Jenny's blogs.