Ever since I taught myself to cook as a university student from Madhur Jaffrey’s Indian Cookery, cookbooks have been important to me. I have long been someone who read cookbooks for pleasure – happily poring through them at night in bed – and, of course, through my work as a food writer I have also written them, so understand how much work they take. In May 2019, prompted by my affection for cookbooks, I tweeted ‘I love cookbooks and I know I am not alone, so am starting #7favouritecookbooks’. The response was remarkable; I had struck a chord. Around the world people – fellow food writers, chefs, food producers, home cooks, food lovers in countries including America, Australia, Canada and India – all joined in and shared their beloved cookbook choices. There was a generosity to both the sharing and the responses the choices engendered: recognition, agreement, interest, discussion. It was a happy example of how convivial social media can be, connecting people who share an interest. What delighted me was how it was good cookbooks – well-written, knowledgeable, characterful cookbooks – which were chosen over and over again as people’s favourites. 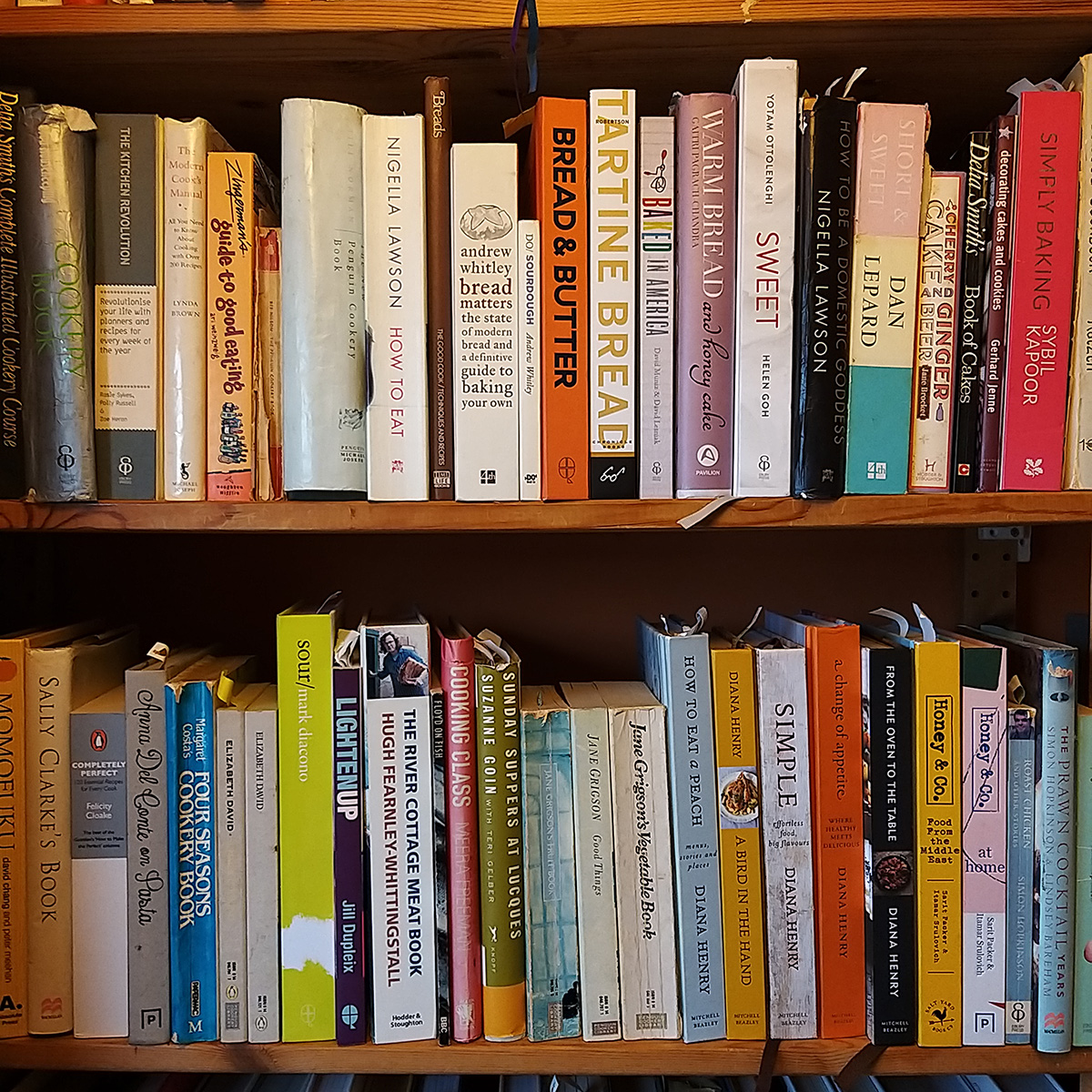 As the choices flooded in, food writer Thane Prince suggested on Twitter that someone should record the book titles. At the time I was simply too busy with work, but Twitter acquaintance Alan Smeaton – who had shared his own #7favouritecookbooks and followed the ‘conversation’ with interest – very kindly volunteered. As the long list of 825 titles below shows, charting the choices on both Twitter and Instagram proved to be quite an undertaking, requiring a huge amount of perseverance and time on Alan’s part. When he kindly sent me the completed list, I rang Alan for a chat to ask what had prompted him to undertake such a mammoth task.

“Fundamentally, I’ve always been fascinated by books, ever since I was five,” Alan explained. The love of food “came somewhat later” though. Alan grew up in a coal mining town in the Tyneside in late 50s and early 60s – “no food culture in those days. My mum, bless her, was a terrible cook!”  In the late ‘80s, however, Alan’s work took him to London where he started visiting restaurants. “I still remember being taken out to Sally Clarke’s, Stephen Bull’s – I suppose that’s where it started. It was an interest in restaurants and an interest in chefs.” Although, as is obvious from his tweets, Alan knows and appreciates both good food and good food writing, it turns out that he himself is not a keen cook; “I am very lucky,” he laughs, “my wife is a very good home cook.”

Regarding the #7favouritecookbooks phenomenon, “Well, I just got so interested,” Alan told me. “It seemed a shame that it would finish and – if it wasn’t recorded somewhere – would just be forgotten about. I felt that would be a pity when there was so much useful information there. A whole load of fascinating books that certainly I’d never heard of, so it seemed worthwhile to do.”

There is indeed a rich variety to the #7favouitecookbooks list Alan has compiled. Here are food writers past and present, established and lesser-known, and cookbooks ranging in subject from cooking techniques and ingredients to cuisines. As #7favouritecookbooks unfolded and I read people’s accounts of their favourites, I found myself succumbing to cookbook desire and buying a number of them. Reading through this list of titles, I have now spotted several more cookbooks I want to buy…

A very special #7favouritecookbooks addition to my library was kindly sent as a gift from Canada by Jasmine Mangaraseril, aka @cardamomaddict, who had also enjoyed taking part in the challenge. She sent me one of her favourite cookbook choices and I am now the proud owner of Edna Staebler’s Food That Really Schmecks, a Mennonite country cooking classic. Written with warmth and charm, the book is a fascinating glimpse into a world and a cuisine about which I knew nothing. Her thoughtful gesture in sending me a copy of this cookbook – which means so much to her – seems to capture the spirit of sharing which #7favouritecooks released.

I wrote about the enduring appeal of cookbooks in The Sunday Times.

I’ve proofread the list to check book titles and authors, but if you spot any mistakes do please get in touch so that the list can be amended accordingly. Thank you.

'More often than not, the robust little pie makes it to the final destination in better shape than I do.' @rubytandoh celebrates the joys of hot water pastry (which can be made by those with hot hands) for perambulatory pies in @NewYorker. twitter.com/rubytand…

#ChildreninRead I'm donating a signed copy of The Missing Ingredient - my book looking at time as the invisible ingredient in the food we grow, make and cook - for #ChildreninNeed auction which ends 11pm tonight. Such a good cause. jumblebee.co.uk/chil…

Have glimpsed some of @chantalcoady The Chocolate Detective's new winter range over on Insta. Very tempting indeed! twitter.com/chantalc…

AI narrated audiobooks! What a dreary, depressing thought. Also - why? We have wonderful actors like @exitthelemming and Timothy West to tell us stories. Infinitely better. @BBCr4today

I've signed and RT-d. Please do the same. The #AntibioticResistance crisis is such a serious issue. twitter.com/SoilAsso…